GBH and the President’s Commission on the Status of Women 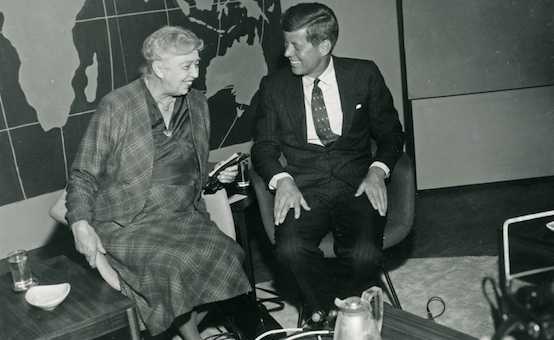 October 11, 2013 marks the 50th anniversary of American Women, the final report requested by President John F. Kennedy at the inception of the 26 member President’s Commission on the Status of Women on December 14, 1961. GBH and Massachusetts played an important role in the pubic history of the Commission when they partnered with Brandeis University in the production of the roundtable policy series Mrs. Eleanor Roosevelt Prospects of Mankind, moderated by Eleanor Roosevelt. The final segment of Mrs. Eleanor Roosevelt Prospects of Mankind: What Status for Women? first aired June 4, 1962. It included a 10 minute discussion between President Kennedy and Eleanor Roosevelt who had been appointed by the President to chair the Commission. A discussion with four experts in labor and education, Secretary of State Arthur Goldberg, Agda Rossel, Representative to the United Nations for Sweden, Thomas Mendenhall, President of Smith College, and Dr. Mirra Komarovsky, Professor of Sociology at Barnard College, followed the Kennedy interview and served the public well in communicating the issues the American government would be evaluating with an eye toward improving opportunities for women. The GBH production and President Kennedy’s executive order to establish the commission predates the February 1963 publication of Betty Friedan’s Feminine Mystique, the work most often credited for the start of the Women’s Movement of the late 1960’s. Though Friedan’s book and her help in organizing NOW at the third annual conference of state Commissions on the Status of Women held in 1966 are often seen as the catalyst for change in the nation’s policies for women, a closer look at the earlier President’s Commission on the Status of Women reveals how the work of a different woman, Esther Peterson, Executive Vice Chair of the Commission on the Status of Women, carefully set the stage to ensure NOW’s success. This collection gathers newly digitized primary source media archives and research from the GBH Open Vault, the John F. Kennedy Library, and Brandeis University, to share the contribution public television played in giving status to the work of the Commission and to utilize digital capabilities for the public education of a new generation. 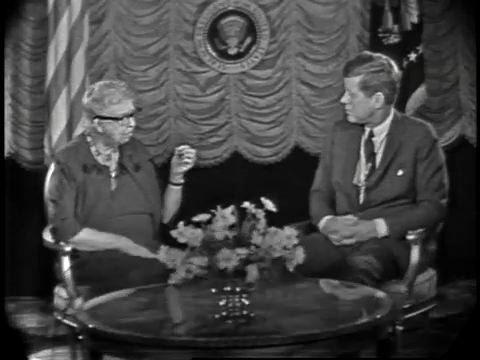 What Status For Women?