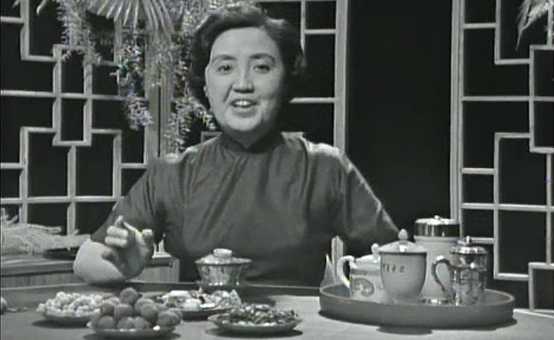 The astounding renown that GBH had had by the mid-1960s achieved with Julia The French Chef is now well known and has been studied in depth from a variety of angles. But much less known, and much less attended to in many histories of television cooking, is the fact that Julia Child's success spurred GBH to look to program more works of instructional television and even of instructional cooking television. In particular, in 1966, the station worked with renowned cookbook author and Cambridge restaurateur Joyce Chen to develop a series on Chinese cooking. Eventually, 26 episodes of Joyce Chen Cooks were shot and aired between 1966 and 1967. Significantly, for a series that was intended both to extend the impact of The French Chef and yet move in cultural directions all its own, Joyce Chen Cooks employed the exact same studio set as The French Chef but with French motifs swapped out for stereotypical Asian ones (for example, wind chimes that opened and closed each episode). The use of the same set for two different shows allows us to discern carefully how two women, very different in dynamics of personality, both set out to mediate foreign foods for American palates and enables us to pinpoint both the regularities in cooking pedagogy at the time as well as the distinctiveness of any one personality as it engaged with its mission of culinary instruction. Joyce Chen belonged to a demographic of Chinese who had been well-off before the Communist take-over and became emigrés to the new world of America where they often employed the practices of high living and high-level socializing in service and hospitality industries such as the restaurant business. Where Chinese food in America had often seemed plebian and even low-class (the chop suey joint as a cheap source of bountiful food for clerks and downtown workers), the new Chinese entrepreneurs often set out to render Chinese cuisine in upscale terms that would attract well-off customers. Chen's fancy Cambridge restaurant was, for instance, a favored venue of such notable professionals as John Kenneth Galbraith, former Harvard President Nathan Pusey, and President Medal of Freedom recipient Paul Dudley White, a noted cardiologist who would in fact pen the foreword to Joyce Chen's 1962 cookbook. My essay situates Joyce Chen within the context of this emigré culture and its attempts to craft a version of Chinese cuisine that would appeal to urban professionals in the U.S. context. In particular, we see how Chen simultaneously extended the values and virtues Chinese food held for those Americans who were deemed to be open to a seemingly more upscale and more adventurous experience than middlebrow Americanized Cantonese cuisine alone (in fact, she touched on Peking, Shanghai, and Szechuan cuisines, along with more familiar Cantonese favorites), while she also translated exotic, even challenging fare into acceptable, even comforting, Americanizing terms. Above all, she felt that one defining characteristic of American lifestyle was the pressure of time, and she tried to teach shortcuts and tricks by which seemingly ambitious (and therefore, to guests, impressive) dishes could be crafted in expeditious, effective manner. Unfortunately, Joyce Chen Cooks never had a corporate sponsor behind it, and the show didn't last beyond its one season. Chen did return to GBH in the 1970s for a generally well-reviewed special, Joyce Chen's China, but soon after accident and illness led her to retreat from the public scene. Nonetheless, the episodes of her series survive to instruct us today on a lesser-known yet meaningful moment in the history of televisual culinary art.

For a look at cooking shows before Julia Child and Joyce Chen, here is a clip from another early show, the Edith Green Show.

For a look at cooking shows before Julia Child and Joyce Chen, here is a clip from another early show, "It’s fun to eat" with Elena.

For a detailed presentation of one TV chef from this earlier period, Florence Hanford, there's a wealth of information here.